Mr. Bradford holds degrees in Music Education from Washburn University and Kansas State University. He was the USD 232 winner in the Kansas Teacher of the Year program in 2018–19 and is the DHS Fine Arts Department Chair. Mr. Bradford’s professional affiliations include KBA, KMEA, and Phi Beta Mu. He currently serves as the Executive Director of ECKMEA and is on staff with the Kansas Ambassadors of Music.

Mr. Kaul holds Bachelor’s and Master’s Degrees in Music Education from the University of Kansas, where he graduated with highest distinction and completed the University Honors Program with certifications in Service Learning and Leadership Studies. He was the DHS representative in the Kansas Teacher of the Year program in 2021–22. His professional affiliations include KMEA and KBA. 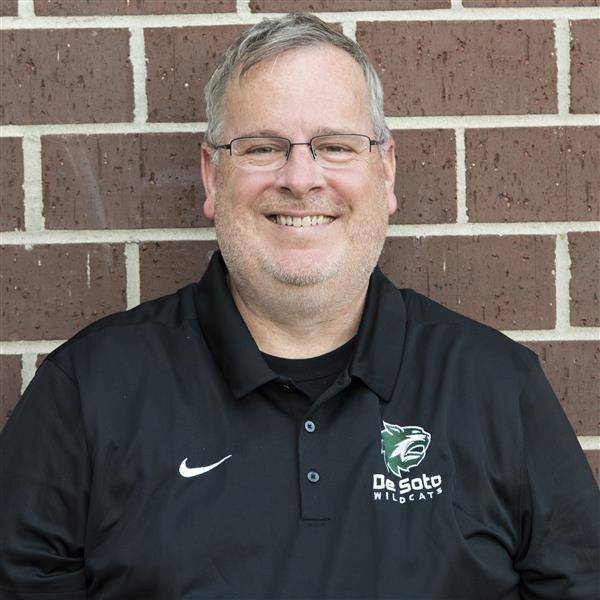 Mr. Thomas Kuhn has been the instructor for the DHS Drumline since 2010, as well as a parent volunteer since 2007.  Tom studied percussion at UMKC’s Conservatory of Music and Music Education at The University of Kansas.

Mr. Kuhn enjoys working in many capacities as a percussion instructor, including preparing students for state solo and ensemble auditions, providing leadership opportunities, as well as leadership coaching, involving middle school students to collaborate with high schoolers in the Percussion Madness ensemble, and teaching private lessons.  He has also been a percussion instructor for the Lions State Band, has run sectionals for KMEA, and has been a judge for various student auditions in the area.

Mr. Kuhn has been involved in community performances, including Desoto Brass Band, The Kansas City Wind Symphony, and Shawnee Civic Band.  He is an honorary member of Phi Mu Alpha Sinfonia.

Whitney Sweatt has been performing in a marching band since 2009 and colorguard since 2011 as a student at Blue Valley West High School. She played trumpet in all the band ensembles, and performed with flags and weapons lines in winter guard. In college, Whitney was a member of the Kansas State University Pride of Wildcat Land for 4 seasons. She was a section leader for 2 seasons, which involved running sectional rehearsals, choreographing halftime routines, and leading various camps or clinics for high school students.

Whitney is a 7th grade math teacher in Shawnee Mission. She believes in creating a positive and safe space for all students to be welcome, even if math is not their favorite subject. Similarly, she works to make color guard a safe, fun space for students to find a home while pursuing expression through music and movement. Outside of work, Whitney enjoys board games and baking!