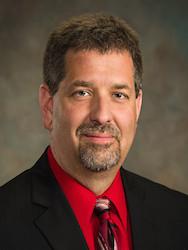 The Board of Education of Unified School District No. 232 named Frank Harwood, Ed.D., as Superintendent of Schools effective July 1, 2016.  Dr. Harwood came to USD 232 from Bellevue Public Schools in Bellevue, Nebraska, where he served as superintendent for five years.

Prior to Nebraska, Harwood worked as an educator in Kansas for 18 years. He was the chief operations officer for Lawrence Public Schools, USD 497, for two years. In that role he directed finance, human resources, facilities, maintenance, food service, transportation and technology.

He began his education career in 1993 as a science teacher at Perry-Lecompton High School before serving as an assistant principal at Leavenworth High School. In 2005 he became principal at Central Junior High School in Lawrence, Kansas, then moved to the district office in 2008 as director of technology.

Harwood is married to his wife, Jamie, a former teacher and an attorney. Together they have two children, Zach and Kelsey.