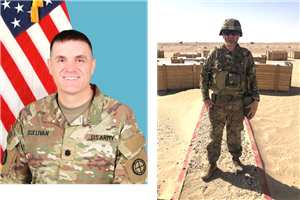 In addition to LTC Sullivan, the school district is proud to share that another employee is serving our country. Leanna McClintock is a second grade teacher at Clear Creek Elementary school in Shawnee. She is also First Lieutenant, Company Commander of Delta Company, 1st Battalion, 108th Aviation Regiment with the Kansas Army National Guard. 1LT McClintock is a helicopter pilot. We are sharing this information to show deep appreciation for those currently serving our country.

In recognition of Veterans Day, November 11, 2022, USD 232 extends its heartfelt thanks to all individuals who previously served our country in the armed forces. Thank you!